A Loose History of Mountain Bike Racing, and the rise of a Series in MN from Gary Sjoquist’s Rapidly-Fading Memory

What follows in an unofficial look back at mountain bike racing in Minnesota, beginning with 1990, when Sjoquist and wife Connie got bikes and began attending races in what was called the Midwest Series.  Any mistakes in the following narrative are all mine.   If you have additional information (or outright corrections) to add to this recollection, please contact MNMBS Executive Committee member Chad McDonald.  We’d like to add this document to the MNMBS web site for future reference. Thanks!  Narrative in bold italics are from Gary Sjoquist.

The Beginnings of the Minnesota Series

Sjoquist got his first mountain bike in 1990, a Malcolm Smith branded bike received in a trade of a waterlogged Kawasaki KDX 200 (it's a long story – takes a couple of beers).  Anyway, the bike seemed lonely sitting there on the sales floor of Tom Mason’s Top Line Cycles, a motorcycle shop Gary was doing promotional work for to fund his motorcycle roadracing at BIR).  He liked riding the mountain bike in the woods right away, and bought a Diamondback for wife Connie (Valentine’s Day) and they began attending Midwest Series races around MN, WI, and IA (check Appendix A for a list of events from 1990, complete with notes on what races Gary and Connie chose to do back then).  The Midwest Series was run by Ron Moffit and Rich Goosen.  Ron ran ran a race down by Zumbrota, near where the Spring Creek Motocross track eventually landed.  Rich Goosen hosted a time trails event down by Decorah.  But they worked together to assemble and run the Midwest Series over several years. 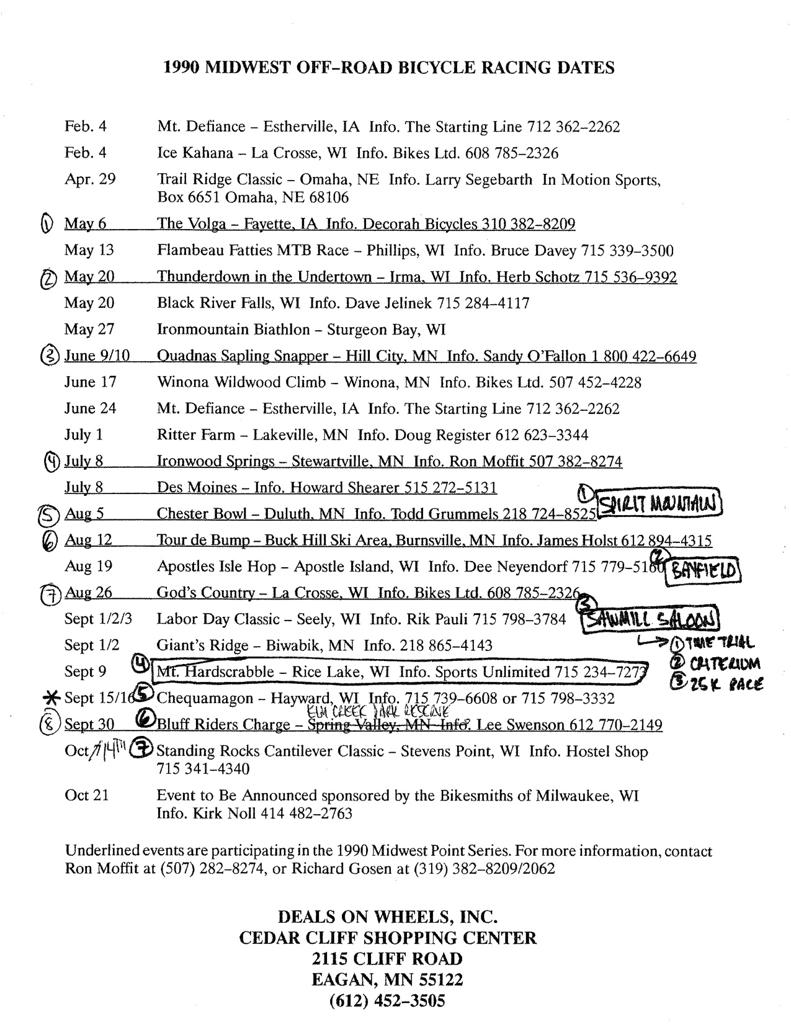 In terms of a Minnesota-specific races, Sjoquist recalls doing a mountain bike race with Connie at Spirit Mountain in 1995, the first year of an organized MN “series” featuring 8 races spread throughout the state.   Ron Moffit, with help from Lee Swensen, and then Todd Bollum, ran the Series, eventually known as the Salsa Series (for Mexican restaurant title sponsor Chi Chi’s), up until 1999.

In 2000, the Series expanded again, and was given a new name – the Minnesota State Championship Series (MNSCS).  MNSCS was run from 2000 through 2002 by Adam Schmidt and Greg Blasko, who did a great job of bringing a business-like approach to the Series, and attendance numbers for those years was quite high.

Blasko and Schmidt decided to walk away from running the MNSCS in 2002.  For the 2003 season, Erik Saltvold, Founder of Erik’s Bike Shop, approached Sjoquist, who had started working at QBP in 1998.  Saltvold asked Sjoquist, as the Bicycle Advocate for QBP, and who had launched MORC in the early 90s, to help revive the MNSCS, which had seen a decline in participation by nearly 40% between 2002 and 2003.  Sjoquist began working with Erik’s Bike Shop Marketing Manager Libby Hurley as administrators of the MNSCS, aided by significant funding committed over the next 5 seasons from Erik’s Bike Shop.

Unfortunately, records, photos, and paperwork have been lost regarding MNSCS seasons 2003 through 2005.  Thanks to Greg Blasko and Jeff Robertson, we have participation numbers as well as largest races of the season identified below.

Additionally, beginning in 2003 and continuing into 2018, the season-ending Awards Party is held at Quality Bicycle Products in Bloomington.  The Awards Party, free to racers and their families, becomes a highly valued event (300+ attendees) to close the season and hang one last time with fellow racers.

(I’d like to thank all those who have both attended the Awards Parties over the years, and who also helped with set-up and cleanup – Sjoquist)

Races Held as Minnesota State Championship Series (MNSCS), from 2006 through 2010.  This listing includes total participation for each year, as well as identifying the largest race of the year (thanks to Jeff Robertson from Rochester who provided these numbers).  Also listed are the significant changes for each season, and the names of dedicated folks who helped run the series over the years, all on a volunteer basis.  (I’ve made an attempt to acknowledge their efforts and dedication to mountain bike racing.  If I’ve overlooked your contribution, please let either myself or Chad McDonald know).

2006 – Note the MNSCS has 7 races at ski hills.  Over the next several seasons, Hurley and Sjoquist work to find new race venues in locations other than ski hills to promote growth and refocus the race platform to engage more women and teenagers.  Adam Schmidt, Scott Finne, Jay Richards, and Lee Swenson, who were experienced race promoters, helped form the loose guidelines (read largely undocumented) and practices for the MNSCS as participation grew and new race venues were added over the next several years.  Libby Hurley, in particular, brought a sense of fiscal responsibility to the Series and her Marketing expertise helped the Series grow.

In 2009, Erik’s decided that running the MNSCS was no longer desirable, and exited as unofficial sponsor now that participant numbers had increased and stabilized.  This included the loss of Libby Hurley’s considerable efforts to administer the Series.  Jeff Robertson, formerly the promoter for the Steeplechase race in Rochester, and who had become involved in helping run the MNSCS, began working closely with Sjoquist.  For many seasons forward, Jeff provided valuable financial oversight and a common sense perspective for how the Series should be run.

Also in 2009, Sjoquist and Robertson decide to form an Executive Committee to bring a more formal approach to running the MNSCS, and to utilize valuable experience from racers.  Thanks to input from new Executive Committee members Matt Johnson, Dana Schoppe, Clayton McLagan, and later Valerie Dosland, an MNSCS Guidebook was printed for the first time.  Dana Schoppe becomes our “Series” photographer, providing much needed photos for promotional materials.  Executive Committee members are unpaid volunteers, but can be reimbursed for expenses related to running the Series.

Additionally, a SuperPass process is implemented in 2009.  Organizationally, the SuperPass is important to the MNMBS – as an early season funding source, it generates badly needed income to pay for the upfront operational costs (race day medals, insurance, etc.) to get the racing program going prior to race fees coming in.

Also notable for 2009, the Border Battle at Whitetail Ridge breaks the 600 racers barrier with a total of 633, and over the whole season, the 4000 participant threshold is broken for the first time.

The MNMBS also purchased a trailer in 2011 and began using a more formal starting and finishing chute procedure, using (and paying) specific set-up people.  Executive Committee member Valerie Dosland decides to leave the MNMBS.  Bev Carlson takes her place on the Committee.  Bev’s husband, Mick, outfits the trailer and begins a multi-year role as a trailer hauler and infield set-up staffer, and is compensated for his many hours of service on race days.

2012 – The Minnesota High School Cycling League is launched.  Thanks to substantial funding over a 3-year period from the MNMBS, and sharing resources like starting chute, sound systems, and generators, the MN League is able to gain financial stability quickly, and begins annual growth of nearly 40% in participation.

The MNMBS decides to end publication of the Guidebook and focus on online information and registration.  Todd Bauer becomes the Series photographer, replacing Dana Schoppe.  Todd begins a long run as photographer extraordinaire, providing fabulously clear photos of individual racers from a separate website that are available to be purchased.  Additionally, Todd provides great photos for our end of the season awards given to podium finishers.

With the Border Battle with WORS dropped from the 2011 schedule due to low participation, the Border Battle is brought back in 2012 as an MNMBS race no longer in conjunction with WORS.  Additionally, a second Wisconsin race, called the Woolly, is added in St. Croix Falls.

David Slovick joins the Executive Committee.  Over the next several years, David is instrumental in helping develop the Timing System used by the MNMBS.  As an experienced racer, having raced in large races outside of Minnesota, David brings fresh ideas about promoting the MNMBS and keeping racers of all abilities engaged in the MNMBS.

2013 – After nearly 5 years of service, longtime Executive Committee member Matt Johnson decides to leave the committee to devote time to his sons’ racing in the new high school league.  Pete Borgen joins the Executive Committee.  Over the next several years, Pete and Clayton McLagan do an excellent job of cultivating sponsorships, including Title Sponsors Peace Coffee and 401 Manufacturing.

2014 – The MNMBS introduces the 4-hour Marathon Class (which, in the spirit of full disclosure, Sjoquist thought was a dumb idea).  It was David Slovick’s idea, though, and right from the start it was very successful.  Additionally, because a lot of our advanced and Elite racers decided to join the Marathon class, it meant many mid-pack racers were able to move up to become podium finishers for the first time.  It was also a bad year for weather, causing two races to be rescheduled for much later in the season than normal due to conflicts with the new high school mountain bike league.  The Voyager’s Revenge was also added at Mission Creek near Jay Cooke Park in Duluth.

2015 – The MNMBS adds Dirt Wirx at Hillside in Elk River, and the Cuyuna Crusher at Crosby.  Pete Borgen decides to leave the MNMBS Executive Committee.  With Derek Vandevelde leaving, Mike Hall begins working on race days as the infield set up person, allowing Sam Oftedahl to focus on getting registration going on race mornings, and being the onsite point person to ensure MNMBS procedures are followed by the individual race promoters.

2016 – the MNMBS adds the Lake Rebecca Race with Three Rivers Parks District and the Shakedown with Detroit Mountain Recreation Area.  Races at ski hills now down to 3.

2017 – the MNMBS adds Gamehaven in Rochester as a new venue, utilizing some sweet singletrack built by Jeff Robertson and RASC members.  Todd Bauer decides to leave the MNMBS as our photographer, unfortunately.  His work over the past four years greatly contributed to the growth and success of the MNMBS.

Also in 2017 - Sjoquist and Robertson begin their exit strategies from the MNMBS.  Since 2009, when the season ending balance for the Series was $3000 (barely enough to order medals and number plates), thanks to the input and commitment of many dedicated volunteers and literally thousands of racers to help fuel the Series, funding for the MNMBS checking account has risen dramatically as the 2017 season ends.

For 2018 the series has gone All Inclusive.  So that ALL riders will earn point, be eligible for team points and end of year awards.  This year we hope to bring more people into the "Series" family to enjoy the races all season long.  The series also added a new venue in 2018. Theodore Wirth Park, through the efforts of The Loppet Foundation, will be bringing new trails for bikers and hosting the first of hopefully many races to come.